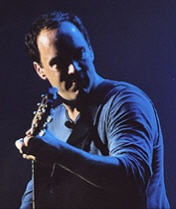 While listening to Yahoo Music LAUNCHcast Radio I decided to start my day with some Dave Matthews. His song “The Maker” just played and I caught a portion of the lyrics and restarted it from the beginning. I’m a fan of Dave Matthews but I’ve never heard this song before so it was a good find.

I wanted to share the lyrics of the song with you and see what you though about them? I was also caused to think of Dave’s name as well, pretty Biblical sounding as well.

Oh, Oh Deep water
Black, and cold like the night
I stand with arms wide open
I’ve run a twisted mile
I’m a stranger
in the eyes of the Maker

oh river rise from your sleep….