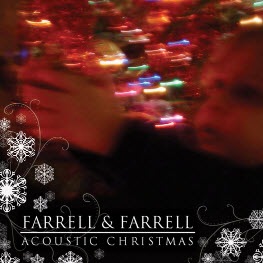 Christian music duo Farrell & Farrell has released Acoustic Christmas, an intimate acoustic collection of Christmas carols and Bob Farrell originals.  As Bob states, “This album is one we’ve had in mind for years…acoustic guitar, light percussion–songs and favorite carols that focus on the Christ of Christmas, including a couple of songs I wrote for other artists along the way.  All the instrumental work is that of Tom Hemby, our longtime friend and co-producer of the Superpower album.”

This album is not intended to be a high-profile new release reminiscent of the very techno Farrell & Farrell albums of the 80’s–rather a sort of Christmas card from the Farrells to their extended family that will hopefully keep on giving for years to come.

Downloads and CD’s are available at farrellandfarrell.com