Francesca Battistelli “My Paper Heart” Tops the Charts for August 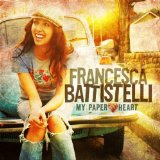 There haven’t been a whole lot of new female vocalists hitting the charts that have really grabbed my attention lately. That is except for Francesca Battistelli! After getting my hands on her album “My Paper Heart”, I’ve continued to enjoy her music and all of the songs on the album. I don’t seem to be the only one that continues to appreciate her talent more and more.

Nashville, TN – Fervent Records’ GRAMMY-nominated artist and reigning Dove Awards Female Vocalist of the Year Francesca Battistelli is on top of the world right now with her debut album My Paper Hearttopping the overall Christian/Gospel Album Chart for four weeks in a row, making her the highest selling female artist in the genre in five years. This album features the hit singles “Beautiful Beautiful,” “I’m Letting Go,” “It’s Your Life” and the record-breaking smash hit “Free To Be Me” that held the No. 1 spot on the Billboard Christian/AC Radio chart for 10 consecutive weeks. Not to mention, all four singles have sold well over 100K digital downloads each with “Free To Be Me” already nearing 300k downloads. In addition to all of these phenomenal milestones, Francesca and husband Matt are expecting the birth of their first child in October.

“I’m so incredibly thankful to my fans and Christian radio for all of these unbelievable blessings that I have cherished this year,” said Battistelli. “Without your support, none of this would be possible. It’s amazing to see what God has done in such a short time. Thank you!”

And, all of the support has definitely paid off for Battistelli. Released in 2008, her album has had the longest run to No. 1 for a female artist in Billboard Christian Album Chart history, a testament to her continually growing fan base and infectious pop soul sound that has been featured on such popular TV shows as ABC’s Extreme Makeover Home Edition, NBC’s The Biggest Loser, FOX’s So You Think You Can Dance and MTV’s The Hills. Luckily, fans will not need to wait much longer for new music. Battistelli is currently in the studio writing and recording for her much anticipated sophomore album, expected to release early next year.

If you’ve only heard her super-hit song “Free To Be Me” you’re missing out and I’d encourage you to pick up the complete album as soon as you get the chance.

2010-09-03
Previous Post: Brandon Heath Touring with Jars of Clay
Next Post: Point of Grace Continue to Impress the CMA