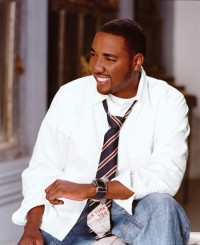 George Huff has really taken advantage of his brief moment of fame as an American Idol, even though he wasn’t chosen as the winner. George finished in the Top 12 of Season 3, but didn’t go further.

You won’t find him mentioned too much in the mainstream news, but he’s building a great ministry work using his music and popularity gained from appearing in American Idol.

Here’s something I didn’t know that George shared in an interview:

There have been an extraordinary number of Christian entrants to American Idol and several, including Ruben Studdard and RJ Helton, have gone on to make CDs. Commented George, “There were so many Christians that auditioned, a whole bunch of them. Almost everyone who was on during our season had some kind of contact with the Lord. One person wasn’t saved, but the other 11, we were all saved and accepted Christ as our personal Saviour. So the Lord is definitely doing something with it.”

In the article for the CrossRhythms website, he goes on to share his experience with the show and some of the turmoil that still occurred through the process…

George had an extraordinary experience on American Idol, being dropped then invited to return. He recalled the whole TV talent search roller coaster:
“It was like I was in Never Neverland. You know when you pray to God and he gives you the word, sometimes you may wonder if it’s God talking. So the whole time as I was walking through that, I was looking for God. He kept saying, ‘Trust me even the more.’ He told me that he knew what my heart’s desire was, but I had to trust him with my WHOLE heart. He said that the way and the understanding would be made clear. And then, I made it to the first round and I made it to the second round. I made it through five more rounds right before entering the top 32. Then, I was like, “Well, now I KNOW it’s God!” But then, he pulled everything from under me; suddenly I was off the show. Then he said, ‘Do you trust me NOW?’ Faith is the substance of things hoped for and the evidence of things not seen. As long as I was passing auditions and as long as things were visible and tangible, it was all good. But for a moment when things weren’t looking good, I lost hope – but only briefly.

I always did enjoy George’s personality, you know it should be more common that the Spirit is seen in us by others like it seemed to be evident in him when he was on camera. It’s good hearing things are going so well for him now with his music and endeavors.