My family and I went to see the Toy Story 3-D Double Feature this weekend at our local theater. While we were there one of the previews was for a Hillsong United Live event called "We’re All In This Together". 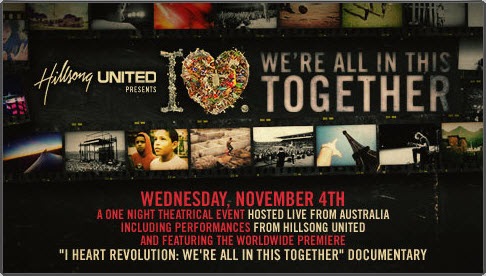 Hillsong United, the internationally recognized worship band will appear in over 440 movie theaters across the US for a one night event on November 4th.  With sold out live shows across the US (and some sold out theaters for this event already), this is the only chance to see this Australian musical sensation in a big way!  Audiences will be treated to:

Hillsong United originally was the youth movement in Hillsong Church out of Australia.  In 1999 United recorded their first Album and has since recorded 7 albums, two of which released as no.1 in the USA Billboard charts in the top Christian category.

You can find more details and purchase tickets from the Fathom Events website here.