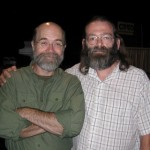 I grew up on Christian Music. I am not that old. I’m not yet thirty (so the picture is my dad with Michael Card, not me) but I remember twenty-five years of Christian music. I was at the first Cornerstone Music Festival in 1984 albeit I was three years old. A few months later, my dad and I moved to Jesus People USA in Chicago and lived there for about eight months. At bedtime growing up, my dad would play different songs on his guitar for me in place of the traditional storytime. My mom on the other hand was a Choir director at the church we went to for several years. Christian music isn’t just something I listen to, it’s something I’ve lived with most of my life.

While there are certainly groups and artists that I love more just because of the style of music, it’s the lyrics that have changed my heart time and again and I have found that It’s the ones that moved my heart more than my feet that I keep coming back to. At a concert I recently had the chance to meet one of my all-time greatest influences in Christian Music. Michael Card. I had seen him in concert before but I never got to meet him before. Andrew Peterson calls him the Gandalf of Christian Music and I agree.

Now some people don’t know who Michael Card is by name, you have to name a song he has written.  He wrote “El Shaddai” which was made Popular by Amy Grant.  In the video below, Michael tells a personal story from his life, a song he says he was “dared” to write.

2009-10-15
Previous Post: Derek Webb’s "What Matters Most" Music Video
Next Post: Welcome A New Author to the Fold – William Lehman