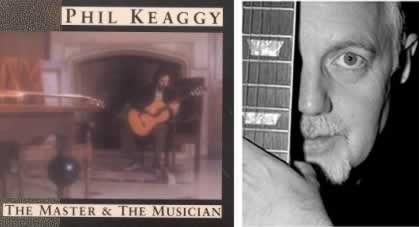 Back in the 90’s when I was a college kid I had the experience of seeing Phil Keaggy perform in concert at my college. The concert was sometime in the winter months, which for Ohio could have been any of about 9 months. However, the impact of the time of year plays into what happened at the concert.

Keaggy was supposed to arrive with the rest of his band, but their flights and most of his equipment got delayed due to the weather and he arrived on campus by himself with just his guitar and some simple audio equipment.

The talent that arose from the performance was something I’d never experienced before in a live performance, or recorded for that matter.

Phil Keaggy did more with his guitar than I ever realized could have been done. He was the first musician I’d ever seen use his guitar for more than just a stringed instrument. He would sample out a beat of percussion using his hands and fingers on the face of the guitar and record it into a device, he’d then loop that and begin layering on more and more sounds, ending up with him playing with himself accompanying and delivering what felt like a full ensemble performance.

In honor of Phil Keaggy’s release of “The Master & The Musician” in 1978, he is going on tour with a host of other great musicians to bring the experience of the original album. He just kicked off the tour this past week in Cincinnati, that may mean it’s the closest he’ll be to me and I missed it!

Unlike anything he has done before on tour, Keaggy will replicate live the intimacy of the studio from 30 years ago in this special concert experience. Every concert on the tour will be full of amazing musicianship, soulful storytelling and the usual humor and humanity of the night’s host. A two-part concert experience, the first set of each show will showcase some of Keaggy’s favorite vocal songs chosen from the span of his career and will also highlight the musicianship of each of the ensemble members. The second set will bring the classic The Master and The Musician album to life as each of the seven musicians will play multiple string, percussion and reed instruments to capture the sonic palette of the album. There will also be a special vocal song tribute to the life-changing work of Compassion International, with whom Keaggy has long been affiliated.

I’ll put the concert dates on the Christian Music Fan Calendar so you can see if he’s coming to a city near you. If he is, I highly recommend hearing him in concert. I’m sure this will be as amazing as my first Phil Keaggy concert back in college.

UPDATE: I received this comment from David Blakeslee letting me know he attended the concert in Grand Rapids and wrote a review. He had this to say…

Things that words can’t express, which is another reason for the instrumental approach. But tempering those heavier feelings was an underlying theme of hope, joy and resolution to continue forward in the face of great disappointment. Though his situation was particular and personal, the music he created connects deeply with many of us who face our own version of those struggles that informed his musical vision. The auditorium he performed in last night was filled with many people whose lives have had a Keaggy-inspired musical soundtrack for decades (and a lot of younger people checking out Phil for perhaps the first, but likely not the last, time!)

Be sure and visit David’s blog to read the full review. I think I may see if I’ll be driving a few hours somewhere to catch this concert.

2008-02-10
Previous Post: We’re the Intolerant Ones?
Next Post: Steven Curtis Chapman Shares A Bit About the History of Christian Music