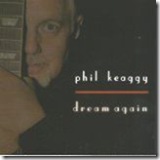 It’s been awhile since we’ve heard from Phil Keaggy. Six years to be exact. He’s delivered another vocal album once again though with “Dream Again”.

I remember hearing Phil Keaggy in concert once when I was in college. He was giving a winter concert and his band got delayed at an airport so it ended up just being him to arrive on time for the concert. Instead of canceling though, he did an acoustic set. I was absolutely amazed at the the music he could produce with just his voice and trusted guitar. However, it wasn’t just the strings on the guitar he got to sing, it was the entire thing. He’d beat out a percussion rhythm and record it with a foot controlled device on the floor. He’d then loop that and begin recording another layer of sound. Finally, he’d come back and begin playing the melody of the song as he sang.

It was so impressive.

Crosswalk.com has a great review of the album and from what they say, I should be stopping by my local Christian bookstore soon to pick this one up for my collection.