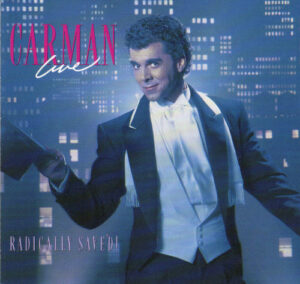 I heard the sad news late last night, early this morning that Carman Licciardello had passed away in a Las Vegas hospital after complications from a surgery. He had amazingly been fighting a cancer diagnosis since 2013 and was planning a 60-stop tour.

I used to listen to his albums on my Fisher-Price kids record player and memorize all the lyrics. I’d then perform his songs for anyone that would show-up at our house and give me the faintest option to listen to me perform.

I met him for the first time in person at a concert in Owensboro, KY, I believe it was on my 13th birthday. I got his signature and was in awe of meeting him. I’ve probably seen him in concert more than any other performer. I’m guessing 4-5 times I believe. The reason I picked the image of him that I did for this post is I had this poster of him hanging in my room.

He was an incredible musician and storyteller and his storytelling wrapped in theatrical music videos and his own live performances told amazing stories of the drama that unfolds around us when God works in our lives and we battle the evil one.

Through childhood, high school, college days and even after college. At each level of my life I believe I was touched by Carman’s ministry in some way. After college, while living in Franklin, TN, my roommate at the time was a digital sound engineer. One of the projects he ended up working on was the audio tracks for an extended music video of Carman’s hit “Mission 3:16”. I very willingly stepped in when he asked me to help him figure out ways to create some of the sound f/x he was needing for the recording. My name never appeared in any credits, but my roommate and I always knew where all those sounds came from for the final product.

The world lost an amazing and talented musician and witness for Christ with the loss of Carman. What are some of your favorite memories from either meeting him or attending one of his concerts? What was your favorite song? I know, I know… hard to pick just one right?!

2021-02-17
Previous Post: Review: “Take Back Your Life” Devotional from Levi Lusko
Next Post: You Were Created to Hear God’s Voice