It’s been an absolutely crazy past couple of weeks for me and I’m overdue in getting this blog post published on a video titled “Patterns of Evidence – Exodus”. 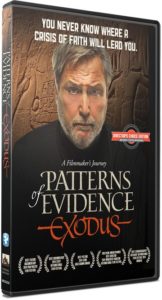 The video is the exploration of a filmmaker, Timothy Mahoney, as he experienced a personal crisis of faith as more and more scholars and even some religious figures make public statements of the biblical story of Exodus not being a factual account, but more of a moral fairytale. His own challenge was that if the account was not factual, doesn’t that cast doubt upon the validity of the rest of the Bible in its entirety?

I was excited to watch this film due to my previous experience working with another filmmaker in a similar project title, “Roadmap Genesis“. My experience working with Rabbi Nolan Lebovitz on his film journey interviewing a variety of Jewish and Biblical scholars as well as celebrities and other specialists in his goal of establishing that the key to our ongoing and healthy civilization as a people can be found in the guide left to us in the Biblical book of Genesis.

In Mahoney’s research of the film he imagines the historical history of events aligned like a giant wall. The foundation of which is set on specific dates in time, upon that a layer of what we believe to be known historical events of the Egyptian people, on top of that the events we read depicted in the Bible and finally other events in history. I believe this is a great way to review the events he’s trying to determine the interconnections of each perspective.

Three major religious texts agree that the events of Exodus occurred: the Jewish Torah, the Christian Bible and the Muslim Koran, yet many archaeologists and scholars believe there is no physical, historical evidence to confirm those events. Could they just be looking in the right spot, at the wrong time of history?

There are five key periods of the Exodus story that Mahoney explores and researches and works to find the alignment within the historical perspective of what we believe is known.

The film is right at 2 hours of engaging commentary, historical video and images and interesting interviews with a variety of specialists and scholars on the subject matter.

If you’re interested in exploring more of your faith and the historical context of the Biblical stories you’ve grown up hearing, I strongly encourage you to pick up this film documentary and watch it with your family and share it with your friends. It’s amazing to me how the evidence that is discovered and shown, still is refused to be believed as being factually accurate in the Bible. Seems an obvious case of denial for me, but I’ll let you decide after watching the video yourself.

Win a FREE Copy of the Film

If you’d like to win a copy of the film, just grab some entries using our entry form below. Entries must be submitted and confirmed by midnight, Sunday, September 10th CST.

If you’re not a winner and would like to pick up your copy of the film, you can Buy It Here. If you use the coupon code “MK1” at check-out you can save $3 off the standard price of $19.95.

You can also watch the trailer and find out more about the filmmaker and the documentary on the Patterns of Evidence website, on Facebook and Twitter.

Disclosure (in accordance with the FTC’s 16 CFR, Part 255: “Guides Concerning the Use of Endorsements and Testimonials in Advertising”):Many thanks to Propeller Consulting, LLC for providing this prize for the giveaway. Choice of winners and opinions are 100% my own and NOT influenced by monetary compensation. I did receive a sample of the product in exchange for this review and post. Only one entrant per mailing address, per giveaway. If you have won a prize from our sponsor Propeller /FlyBy Promotions in the last 30 days on the same blog, you are not eligible to win. Or if you have won the same prize on another blog, you are not eligible to win it again. Winner is subject to eligibility verification.