Matt Hammitt of Sanctus Real Inspired by His New Son 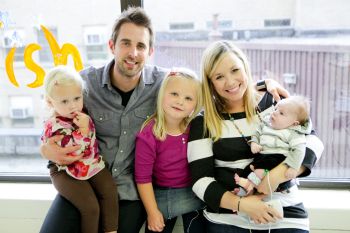 I came across an interesting article the other day that was in the main stream press. It was a story about Matt Hammitt, lead singer of Sanctus Real, and the recent challenges he and his wife experienced this past year with the birth of their son, Bowen. After they found out they were pregnant, the doctor’s gave them very severe news about the health of their son in the fetus. He had a congenital heart defect and didn’t have a very good prognosis.

Hammitt and his wife, Sarah, knew something was wrong minutes after finding out during an ultrasound in April 2010 that their third child would be a boy, following two girls. They saw the sorrow on their doctor’s face even before she spoke.

Doctors later confirmed the baby had a rare congenital heart defect called hypoplastic left heart syndrome, which causes the left side of the heart to be severely underdeveloped. For five months, the couple contemplated all of the possible procedures and treatments while weighing the odds of what could go wrong.

Their baby would face multiple surgeries and an uncertain future at best.

They also didn’t know how to deal with a flood of emotions — the anger, the doubt, the feeling of being alone. Hammitt, 32, decided he needed to tell God how he was feeling, so he started writing songs about their journey.

I think I take the health of my children for granted far too many times. I stress about their “challenges” I face through the day and they’re all normal challenges. How would I have the strength for real battles for my kids if they experienced severe health problems and hurdles.

Reading the story makes me want to hear some of the songs Matt was inspired to write. One of the great parts of the story was that the nurses would play his music for their whole wing after visiting hours were over to soothe all the children, not just Matt’s.