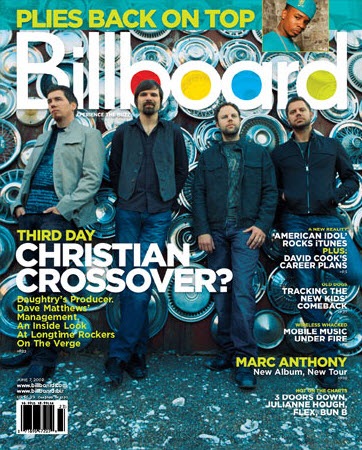 For the first time ever a Christian group has been featured on the cover of Billboard magazine. I’d say that’s pretty huge news for Third Day and their fans. Shoot, it’s good news for people who’ve never heard of Third Day’s music as well because now they just might listen and hear the gospel through the lyrics of Third Day.

The article “Third Day Keeps the Faith“, the magazine talks about the crossover popularity of this group and how they keep pleasing fans and selling out concerts wherever they go.

06/07/2008 Third Day’s Mac Powell, David Carr, Tai Anderson and Mark Lee are enjoying a tasty Southern lunch at Stoveworks in the Factory, a historic Franklin, Tenn., complex that was once a thriving industrial workplace and is now a trendy locale housing restaurants, shops and performance venues. A short while later, seated on the stage of a nearby venue, the foursome introduce tracks from the record and field questions. It’s a show-and-tell that can make even the most seasoned artists squirm, as the band members gauge reaction to the new music and look for affirmation that it’s going to get the troops excited as they prepare to engage forces at radio and retail.

That’s some cool news on this Friday. Congratulations again. Now, let me go check the Christian Music Fan calendar to see when they’ll be in town so I can catch them again in person.