Christine Evans back in the Studio

So this past week I’ve been braving the cold in NYC and working on recording some new tunes with my producer, Tom Hall and my voice coach, Bill Riley. I’m really happy with the way the these songs are turning out; the songs have a little more attitude and edge behind them. Both the songs have what I think are pretty powerful and relevent messages to them so I just really wanted to kick it up a notch and put that power and intensity into the music to match the message. I’m hoping to release a new album this spring and a new single very very soon. . . so keep a look out!! 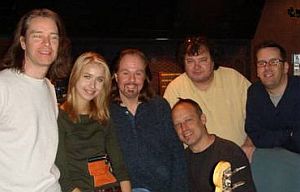