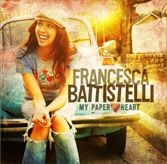 Here’s an artist I’m not familiar with at all but she’s making some news with a new website and upcoming performance in the Big Apple, New York City.

After visiting her website she’s got a really strong voice and the song “Beautiful, Beautiful” sounds really good as well as “Behind the Scenes”. You can listen to samples of both of these songs, as well as others, from her website as well.

(Nashville, TN) June 30, 2008 â€” Fervent Recordsâ€™ new singer/songwriter Francesca Battistelli is slated to make her debut performance in New York, NY at For Your Imagination on July 8 as part of â€œLive at FYIâ€â€™s concert series, in conjunction with the launch of her new community-based website, www.francescamusic.com.

Battistelli will perform songs from her upcoming Fervent Records / Warner Bros. Records release My Paper Heart including the most-added song at AC radio from a new artist this year, â€œIâ€™m Letting Go,â€ and the breakout song that challenges others to take action on issues that matter to them, â€œItâ€™s Your Life.â€ â€œWeâ€™re excited to be working with our friends at Fervent Records and Warner Music Group to help break this incredible new artist, Francesca Battistelli,â€ said John Henkel, For Your Imaginationâ€™s VP of Artist and Industry Relations and the producer of LIVE@FYI.  â€œWe look forward to being a part of Francescaâ€™s development into the star we all believe she is.â€ To catch a live video webcast of the performance, visit www.francescamusic.com at 5:00 p.m. EST on July 8, 2008.

Also streaming on the website from July 8 to street date is Battistelliâ€™s full-length album My Paper Heart, set to release July 22 to critical acclaim. The â€œIâ€™m Letting Goâ€ EP recently went No. 1 on iTunesâ€™ Christian & Gospel page and is currently a Top 10 hit at AC radio. For more information, visit www.francescamusic.com.